I was selected by the Austrian Cultural Forum for an artist-in-residency program at Kooshk Residency in Tehran. So in September 2019 I went to Iran for one month, the maximum time i could get a tourist visum. September is the month of Muharram which is the second holiest month, after Ramaḍān. For this reason my sound and picture collection was quite dominated by religious ceremonies. I planed to go back to Iran in March, when new year is celebrated and the atmosphere is supposed to be quite different, but political tensions were growing, so I could not go anymore. Still i think managed to animate an interesting recyclers film about Tehran, even with so little material.

SCENES
Tschador Mashine
In Iran women have to wear a "Hidschab" to cover their head and hair, if they refuse, they get punishment and even go to jail. It often happens that even the neighbours report a wrong behaviour to the Guadiance Police. The "Tschador" is obliged to be worn in mosques and also in some schools or university. I was quite surprised to see so many women in the streets wearing the tschador, i would say 40-50% of all women, maybe because of the time of Muharram. 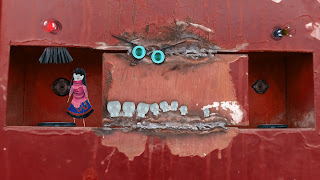 The Twirling Light Object
At one Ashoura procession a man was twirling a two meter high light sculpture on his head, acompanied by drums and trompet music. I was told that the light object was a symbol for the holly shrine of Immam Hossein. I was quite impressed by this sculpture work and the fascination of the people for those religious rituals. But i could also see the ambivalence in the society: the real believers on one hand and the ones who see it as a pure political propaganda on the other hand. At the same time i also realized that those religious festivities are reasons to go out, meet people and eat for free (people were cueing with their tupperware to take free food home). 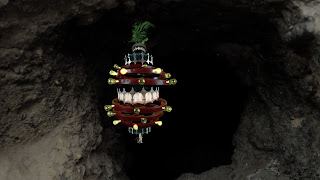 The old Tehran
The Grand Bazaar and its neighbourhood was my favourit place to go. Not when the shops were open but on Fridays, when everything was closed. I walked through the labyrith of little streets discovering the architectural beauty of the old Tehran, sad to see that it is slowly falling appart and disappearing. Some places looked like archeological excavation, original build out of clay and now sourrounded by high cement walls. 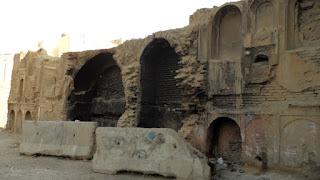 I was happy to manage to capture the sunspots coming through the cupola exactly in the middle of the alley in the Grand Bazaar. 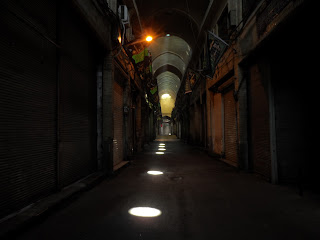 The Breast and Chain Beating Ritual
A mourning rital during Muharram month and Ashoura: a group of man beating their chest with their fist or their shoulders with a metal whip. I was ending up more by mistake within this group of man who were beating their chest while they let out a scream. It was quite an intense and intime situation and i knew, that me, as a woman, i was not really welcome to this ritual. But there i was, discreet recording the sound which i used for my scene.
I created a creature whose underarms are made out of metal whips (you can buy them everywhere during this month). The creature is beating himself to the screams of the chest beating men, till all falls off from his face and a beard starts to grow. 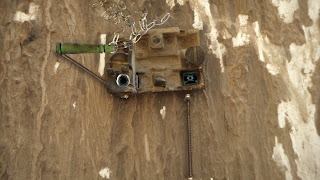 Laughing and Crying
During my Friday`s-Straying-Around in the Grand Bazaar, i heard this bizzare laughing-megaphone-sound. I sat down to record it and realized that it is a mourning and crying in between of some kind of prayings, and not a laughing. A few other people sat down to listen, drinking free tea, when one woman really started to cry.
During my stay in Iran i learned, that in their culture crying and laughing are equal expressions of emotions. To cry is nothing to hide or to do in privacy. People can easily switch between those two contrasty emotions.
In my animation i decided to leave the object out, which i had animated orginally, namely a laughing mouth. I decided to leave it open for the viewer, if he hears laughing or crying, i just put a curtain to not see exactly what is behind. 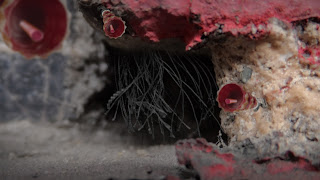 Zourkhaneh Ritual
This ancient ritual goes back to Persia's pre-Islamic times and is a kind of a training to strenthen the mind. It is not public, i needed an appointment to join. In the end I was watching for two hours the training of a group of men. Their exercices were quite a torture: they had to walk in a circle for 15 min, then they had to do push-ups. The highlight was the swinging of the "meels",  one meter big wodden clubs, and the swinging of clanging metal contraptions. The whole training was accompanied by the singing and drum-playing of a man. 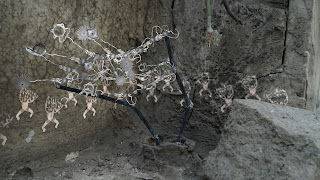 Teahouses and Shisha Pipes
The sound recording from this scene comes from Darakeh District in the north of the city, on the foot of the mountains. Special for this place is its beautiful river sourrounded by teahouses. It is famous for weekends to spend time in fresh air with friends or family, sit on the carpets, smoke a shisha pipe and drink tea. The water from this river flows through the whole city in little canals, people use it to clean the street in front of their house or shop. The water is clear in the north and absoluted polluted in the south. 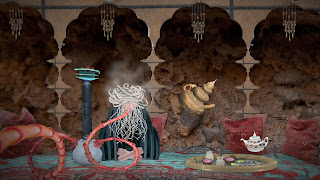 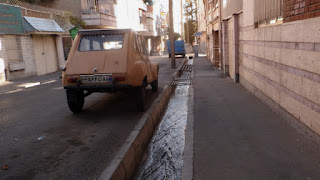